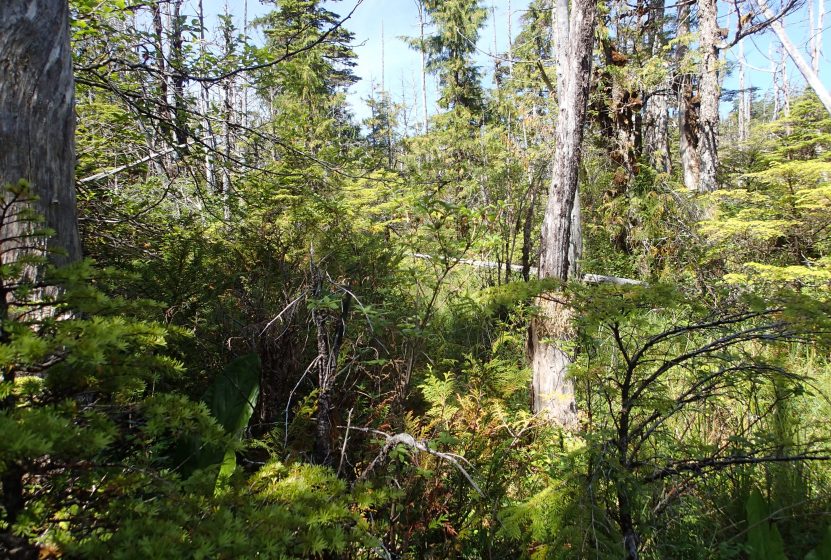 “It’s unusual to travel 100 yards through d8 without bleeding. I’ve never spent more than a half an hour in continuous d8. You often can’t see your feet, and brush is so dense the only way to move forward sometimes is to fall. D8 entails convoluted terrain, blowdown tangle and dense brush. Each step is a logistical consideration.”
Richard Carstensen

One of the lessons learned fairly quickly in southeast Alaska is that there are not very many easy ways to get around. As a paddler, I have always seen the water as my expressway, the most direct and enjoyable way to go from point A to point B. On land, however, it can be a different story.

On southern Kuiu Island, in the few places where there are trails, those trails are often overgrown and treacherous. Game trails, maybe, or the dim recollections of legacy Coast Guard forest routes. Regardless, they would not be considered trails at all in the lower 48, so it is helpful to have another way of describing them. How hard is it to get from the lighthouse to the Landing, for example? (There is a trail involved, but it still needs some work.) If I’m trying to use words to explain how difficult it will be to someone who has not been before, where would I begin?

Well, helpfully there is the “D Scale.” Officially known as the Bushwacker’s Difficulty Ranking, it’s an informative system of grading the hazards of any particular southeast Alaskan bushwack and something we used as a reference on a regular basis this past summer. The way it works is that d1 is pavement, d10 is death. The stuff in between makes for an entertaining read. Give it a look.

For example, when we carried all the bags of debris from the Landing back to the lighthouse, we used the trail. It started out as d3 for the first third of the way, then d2 almost all the way back, with a little d3 right at the end. See? Pretty simple, really.