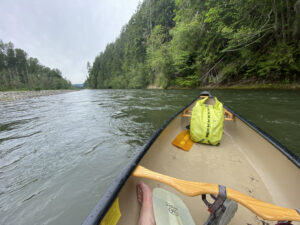 In 2015, the Path of the Puyallup Expedition combined hiking, biking and canoeing the length of the Puyallup River, from the glacier to the bay, sampling for microplastics in one of the first freshwater programs in the Pacific Northwest. Out of this experience grew a series of Middle School workshops, public presentations and social actions centered on single-use plastics.

In 2021, the plan was to revisit the Puyallup, along with the White and the Carbon Rivers and to document environmental issues relating to plastic, as well as to assess some of the threats and opportunities in each of these waterways. Together, these three rivers define the Puyallup watershed; their routes, their histories, and the many stories they tell today provide us with a fascinating sense of place, perspective for today and into the future. 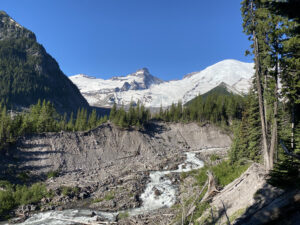 Water samples were collected at various points along each of the rivers, to be analyzed later for the presence of microplastics. The results, along with data from previous samples on the Puyallup, are intended to serve as baseline data for classroom instruction in Grades 6-12 science classes in schools within the watershed. In addition, a teacher training program is under development, which will allow teachers to receive continuing education credit and be able to present the lessons to their students themselves. 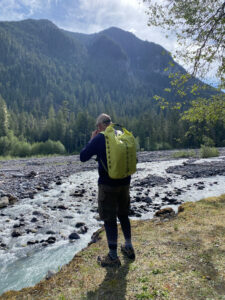 The Carbon River, at a length of 30 miles, is the shortest of three and was completed first. The White River was done in several sections: the upper portion was covered in June and early July but the lower section, from the town of Greenwater to the confluence, had to wait until September as flood conditions made travel hazardous. The Puyallup River was done in two parts as well, and the route followed was largely the same as had been done six years before.

Nine samples were collected and were analyzed in the lab at the University of Puget Sound under the supervision of Dr. Peter Hodum, biology professor and member of the Ikkatsu Project’s Advisory Board. The results of the analysis are posted on the Ikkatsu Project web site and while not entirely unexpected, are still sobering. Every sample collected contained plastic, mostly fibers with some additional fragments. Samples were viewed through a microscope under white light and UV light, with plastic particles seen in each instance. 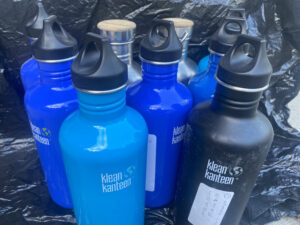 Information collected during this extended effort will be documented here on the web site and, as future work with area schools progresses, those results will be added to the database, providing a clearer picture of the scope of this hidden pollution. While the expedition itself is complete, the work will continue.