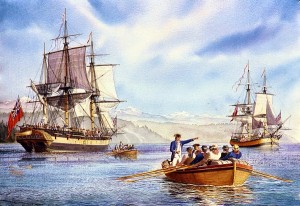 In 1792, Captain George Vancouver sailed the Discovery through the Strait of Juan de Fuca and became the first European to explore the waters of what is now Puget Sound. Vancouver took his ship as far as the southern end of Bainbridge Island. From there, he sent the young Lt. Peter Puget further south in the ship’s longboats with instructions to follow the right-hand shoreline and to determine whether these waters connected to any others (still looking for the elusive Northwest Passage!), or whether it was – as he suspected – an inland sea.

Puget’s journey took a week. In that short time, he was able to produce good maps of the southern region, make contact with the natives in the area, and figure out the complex tide and current patterns along his route. When he returned to the Discovery, he must have known that he had seen a new land in a way that it would not likely be seen again. It was a wild land, an Eden for a wayward sailor, and for others as well. Even then, English and American settlement was coming, close on the heels of Puget’s excursion. 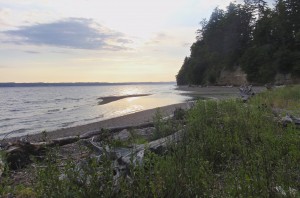 The land and waters of Puget Sound have continued to change since those early days and as the human population has increased, the wild areas have begun to disappear. With the 225th anniversary of Puget’s voyage coming up, the Ikkatsu Project retraced that first trip up the Sound in 2015 and outlined the changes that have taken place since then. The journey followed Puget’s route by sea kayaks, making camp in the same places that Puget stayed and comparing the observations made then with what can be seen now.