THE IKKATSU MISSION:
SCIENCE AND ADVENTURE IN THE HEART OF CASCADIA

In 2012, the Ikkatsu Project was formed in Tacoma, WA. The first Ikkatsu expedition traveled the rugged Olympic shoreline of Washington using sea kayaks, surveying remote beaches for marine debris. Although originally focused on debris from the March, 2011, tsunami that had drifted on ocean currents and made landfall on the coast of North America, expedition members soon realized that the problem consisted of much more than simply the remains of the tragedy in Japan. Beaches and shorelines from Puget Sound to Antarctica are being inundated with pollution, most of it plastic and much of it toxic. Raising awareness about this serious environmental issue, through print, films and data-gathering expeditions is one of the primary goals of the Ikkatsu Project.

The 2013 Ikkatsu expedition traveled to south-central Alaska, to the volcanic island of Augustine, that sits at the mouth of Cook Inlet. Based on computer projections, tsunami debris was expected to have already begun arriving on the rarely-visited shoreline of the island, as well as on the beaches of the nearby Alaska Peninsula, just seven miles away. The Ikkatsu team kayaked around the island, and conducted surveys of the beaches and turned over all of the collected data to NOAA and other scientific organizations. In addition, water samples were collected at various points along the route and sent to the east coast as part of an ongoing global study of microplastics.

Pollution, specifically plastic and other flotsam, is a very real threat to our oceans and to untouched ecosystems like those found on the coasts of the Pacific Northwest and Alaska. It is hoped that surveys like the ones we have done and continue to do will assist in better understanding and remediating the problem. Ikkatsu is a Japanese word that means, “united as one, 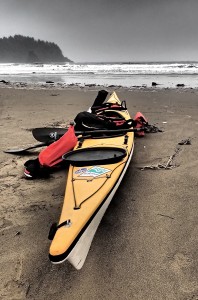 ” which is a concept that the tsunami debris – and all marine debris – illustrates in a powerful way. Ikkatsu expeditions are an attempt to understand how we are connected… no matter how distant something may seem at first glance, we are all riding on the same planet. The vast expanse of the oceans doesn’t keep us apart; it is what joins us together.

In much the same way, the oceans are a part of an even larger system. In fact, it is not possible to say precisely where the ocean begins or ends. Every stream and river that flows down some hill, that starts somewhere in the high country and makes its way down through the flat lands and out to salt water, it is all part of the ocean.

Here in the Pacific Northwest, the Salish Sea provides us with a great example of this watershed reality, as a semi-enclosed, trans-boundary body of water that is continuously shaped by human activity even as it dominates the local environment. From the southern reaches of Puget Sound to Seymour Narrows and out to where the Strait of Juan de Fuca meets the Pacific, the Salish Sea watershed is made up of some of the most beautiful and threatened ecosystems anywhere on the planet.

The Ikkatsu Project is committed to exploration, education and advocacy, blending science and adventure in ways that help us understand this special place, on land and sea. In 2014, Ikkatsu Project programs  included the construction of a plastic-bottle kayak and the voyage that followed, north through Puget Sound. Other major expeditions and programs have included the 2015 Puyallup River sampling journey, the Puget Trail and the South Kuiu Cleanup. Programs completed in 2021 include the Three Rivers Expedition, an opportunity to focus on one of the largest and most diverse watersheds in the Salish Sea region: a return to the wilderness beaches of southeast Alaska in the summer, with a dozen volunteers, marine debris, sea kayaks and a lighthouse; establishing two new deposition study beaches here in western Washington, one in Puget Sound and one on the coast. Semi-annual surveys and cleanups in these locations will help to fill in the blanks about when and where debris accumulates and how cleanup efforts might be focused accordingly.

If you would like more information, or to schedule an interview, please call 253/691-7941 or email Ikkatsu Project Director, Ken Campbell, at