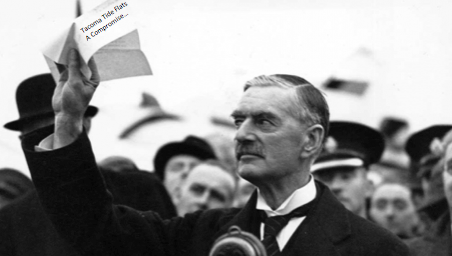 Last week, the Tacoma City Council voted to call a pause on new fossil fuel development in the Port area, holding off for a while to give citizens and representatives time to put together a more comprehensive vision of what the tide flats is to become. After decades of toxics cleanup and decades more of environmental degradation, the idea that maybe we, as a community, should be a little more intentional about our future and our legacy finally seems to have found a bit of traction.

In passing the regulation, the Council elected not to impose a blanket ban on the expanding of fossil fuel operations that are already on site. The general line among council members taking this view was that it would create an undue barrier to these companies (known polluters all), in their efforts to grow their business in the interim period.

Not to seem ungrateful or dim, but wasn’t that supposed to be the point?

The whole program was billed as a “compromise,” an agreement between the Council and the companies already entrenched in the port where each side gave a little to advance the interests of the community. (Many local environmental groups are hailing the decision and saying that it shows a commitment to work toward a cleaner future for the region. I hope they are right.) I think that it’s important to note, however, that this is probably not actually a compromise.

To reach a compromise, each side must be convinced that the other is acting in good faith. Otherwise, the ground that is ceded at the start is simply given away and once it’s gone, it is no longer part of the discussion. To think that it is likely to reach a real compromise with this industry, a 19th-century relic that has continually obscured facts in the pursuit of profit, that is actively promoting climate change and is being artificially propped up with tax incentives and government largesse at every turn, is an exercise in wishful thinking. Where it is not possible to trust the other side, compromise quickly becomes appeasement.

That might be a better word for what happened in Tacoma last week.