Everything seems harder on a Monday 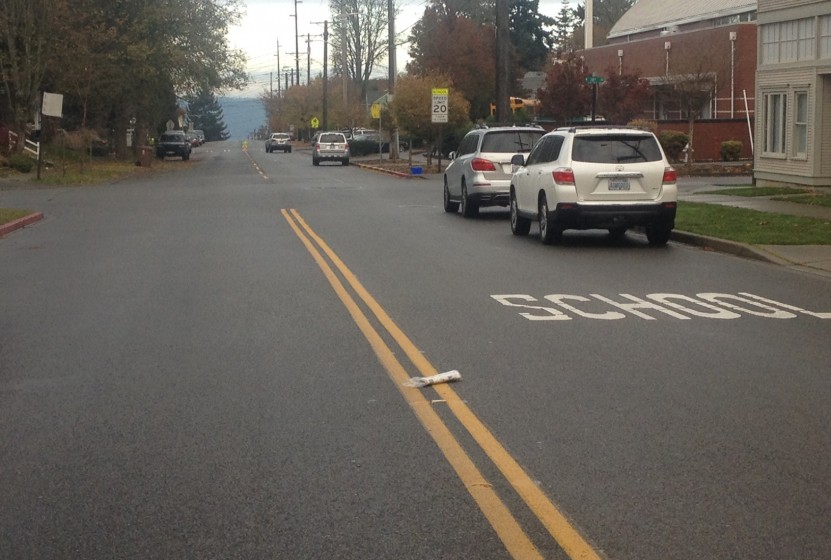 An example of a fresh delivery right next to one that’s been sitting there for a while. In another week, they’ll both be soggy and shredded, and another one will be dumped on top of them. And so on.

There are some things that seem so obviously wrong, they shouldn’t need much explaining one way or the other. There’s no “other side of the story,” no need to look for balance. And, if a thing is very wrong, taking steps aimed at making it less wrong is not the same thing as making it right. Let’s start with that.

A little over a year ago, the Tacoma News Tribune started distributing “Extra” sections of the paper, almost completely made up of ads. These advertising bundles were rolled up and put into skinny plastic bags and delivered to neighborhoods all over the greater Tacoma area. Initially, the people delivering these unsolicited ad bombs weren’t really specific. Unwanted plastic bags were in the streets, gutters, vacant lots, alleyways… almost everywhere but a doorstep or a driveway. It was organized litter on a large scale, with the sad and tattered remains of these parcels eventually ground into the pavement, scratched at by animals and flushed down the storm drains. From there, the distance to the waters of Puget Sound is short, and the possible impacts on the marine environment are sobering.

When I talked with TNT Publisher David Zeeck back then about the unfortunate environmental message his newspaper was sending, he assured me that steps were being taken to address the issues. Furthermore, he contended that the parcels (since dubbed “Zeeckbags” by some of his detractors), contained journalistic content as well as coupons and that these bags were valued and appreciated by the public. There was an opt-out system in place and few people, he said, had used it. His interpretation, it seemed, was that these bags of ads and token “news” pieces were greatly sought-after by the public, who awakened with joy to find them randomly distributed in one neighborhood after another. 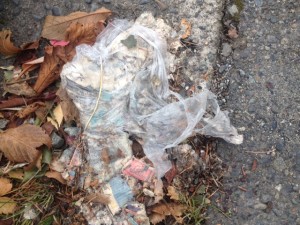 With most of the papers inside decomposing in a wet, sloppy mess, the remains of the plastic bag will soon be carried elsewhere by the wind or the water. Not sure where, but it won’t be anywhere good.

I don’t know what steps were taken to rehabilitate the distribution process – the bags did seem less visible for a while – but whatever was done has apparently come undone lately. By way of an update, the north end of Tacoma was strafed a few nights ago, and the bags that were dropped are once again in the street, in the bushes and already soaking into the ground and the gutters. I assume the same scenes are happening elsewhere in the TNT’s operating area as well. It’s as if the people who are doing the actual delivery are incapable of doing the job they were ostensibly hired to do, and even on the odd chance they do get the package where it is supposed to go, it just sits there, driven over, kicked to the side, soaked through within hours, before becoming part of the scenery for months to come.

If these items indeed had any usefulness, if anyone really wanted them, they would not be rotting on our streets as I type this. That’s not how most people treat the things they value.

So here’s some names and contact information. Use the numbers and emails as you see fit, but please use them:

To opt out of receiving the bag (not really confident this actually will do anything, but you may as well try. Opting out will not keep the bags from ending up in the street or the drains, but it can’t hurt, right?):
800.289.8711 or

(It might be interesting to set up a phone operation and go street by street through Tacoma and opt out every address on every street. Is there a law against that? I expect a call from the TNT legal department soon with the answer.)

Advertisers represented in the current crop of litter bags (Call them up and tell them how you feel about their advertising being strewn through the streets of your neighborhood. If it’s somewhere you shop already and if the manager knows you, have a word with him or her in person. A phone call or an email are the next best thing. Comments are always gladly accepted and managers are motivated by public comments):
Budget Blinds
253.858.5855