This Relentless March of Time

The Devil in the Details

I Have a Plan 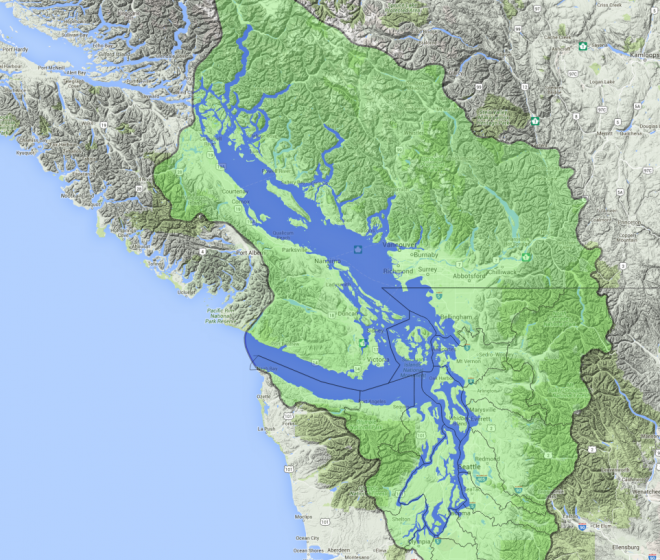 When shown a map of the Salish Sea, only 9% of US residents polled knew what it is called. (More than 50% identified the area as “Puget Sound,” even though it includes both the Strait of Juan de Fuca and the Strait of Georgia.) The result for Canadian respondents were only marginally better, with 15% identifying it correctly but with the majority either calling it the Strait of Georgia or simply, “the ocean.”

It’s a newish word, I get that. And it takes a while for new terminology to catch on, but there is still ample evidence of a residual homerism that we use to view the world, or even parts of it, through a comfortable and familiar set of lenses.

Which is the whole point of referring to this particular body of water as the Salish Sea. The idea is that using this name for the entire inland sea will erase the international boundary (at least in our minds), and allow us to consider the whole region as a single ecosystem, or as a naturally connected entity, rather than two or three different places.

When I was a kid, whenever I said, “I have a plan,” my father used to quietly remark that those were the four scariest words in the English language. But seriously, if the health of the local orca population is going to improve, if the dire salmon situation is ever going to get better, we’re going to need to adopt a regional focus. If the 8 million people living in the Salish Sea watershed are going to get our collective act together, it’s going to be because we start to see the Salish Sea as one singular location, rather than discrete regions separated by arbitrary lines that exist only on maps.

I have a plan that would maybe help with that. More to follow.