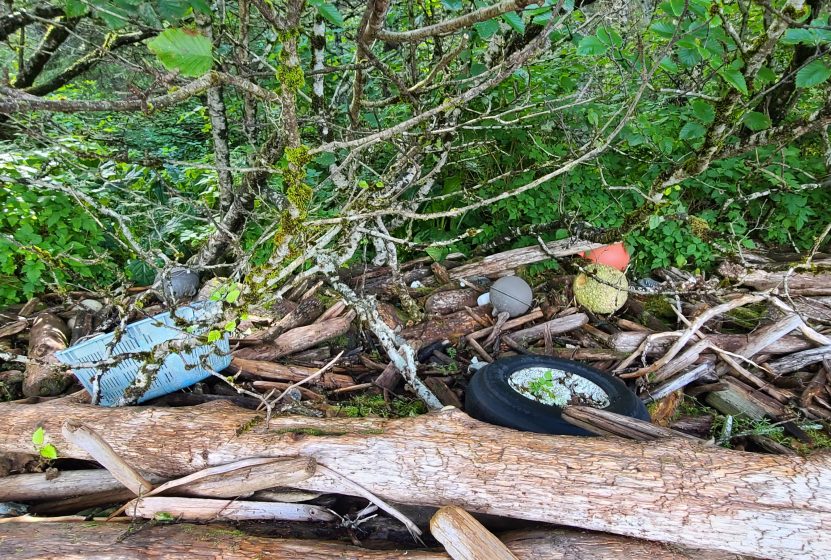 Although the Ikkatsu Project’s trip to the lighthouse was scrapped this year due to the Covid situation, a small group of folks did make it up there after all. Just a few staff members from the Cape Decision Lighthouse Society and one or two volunteers, and only for a week. As it turned out, the weather was epic and the conditions were among the worst seen for that time of year, at least recently. It would have been difficult to accomplish everything that we had set up for 2020 because of the harsh conditions, but the thing I was most sorry about was that we were not going to be able to get the annual deposition data from the Landing, the beach that we’ve been tracking pretty closely since the Alaskan surveys began in 2018. 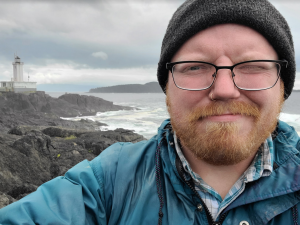 One of the people who did make the trip, however, was Lucas Drawdy, an Ikkatsu Project Alaska veteran of the past two years and an intrepid data collector. He put together the 2020 survey and cleanup of the Landing, preserving the continuity of the study, as well as gathering several water samples for microplastic testing. It couldn’t have been done without him… here’s his story of that day, along with some of his photos.

“In the early afternoon we head up the trail at Huckleberry Hill. The risers of wooden steps that have been completed by CDLS and Ikkatsu Project volunteers provide a welcome change from the slick mud slope that was, until now, the most difficult part of the trail to the Landing. The sun peeks through the long, gray clouds that seem to dominate this part of southeast Alaska, and everyone is chipper and talkative as we slosh our way along the old trail. Careening down the muddy path toward the beach, we pass salmonberries, huckleberries, banana slugs and bear scat. Rain falls lightly for a time as we travel and after the mile-long hike is over, we emerge onto the beach.

“The sun seems to break through for good as we arrive at the Landing. This site, located on the south eastern portion of Kuiu Island and near the boundary of the lighthouse property, has been utilized for years as an alternate access point for visitors, volunteers and in years past, lighthouse keepers and US Coast Guard personnel. Protected from the southwest winds, we have a low tide and calm water… a beautiful day for some beach science! 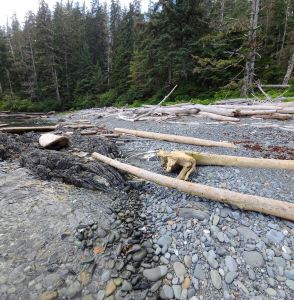 “Our group of five volunteers spreads out, forms a line perpendicular to the water and begins the survey. Moving south from the kayak rack and tent platform that was built during last year’s trip, we immediately encounter plastic water bottles, the most-represented category of debris we will find. As we work our way down the beach, we collect a variety of fishing buoys, nylon ropes, plastic bottle caps, foamed plastic, fishing line and more. When we reach the southern edge of the beach, we turn around, consolidate the items we’ve picked up so far, and make a second pass.  The 100 yards of beach is busy with team members calling out their trash treasures to those who are keeping the tally sheets, then throwing them in with the others as we go along, digging under logs and squeezing between rocks. Before we finish, we collect some water samples for ongoing microplastic testing, part of the stripped-down data package we are going to be able to get this strange year. 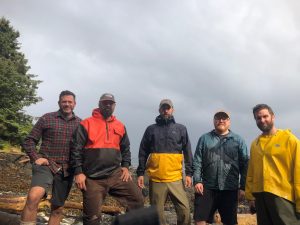 “When we finish the survey and beach cleanup, I am rather surprised at the results: we have 35 water bottles collected, foam chunks and hard plastic fragments, along with dozens of feet of rope and line, but not one cigarette butt. We do have one full garbage bag and some larger pieces but overall, it seems cleaner this year than it did on our first trip here in 2018. We end the day by sending a few crew members back to the lighthouse by kayaks, while the others walk back the way we came. The sun was still out and the sounds of whales out in the channel were in our ears all the way back, part of the daily magic here at our little beach in big Alaska.”