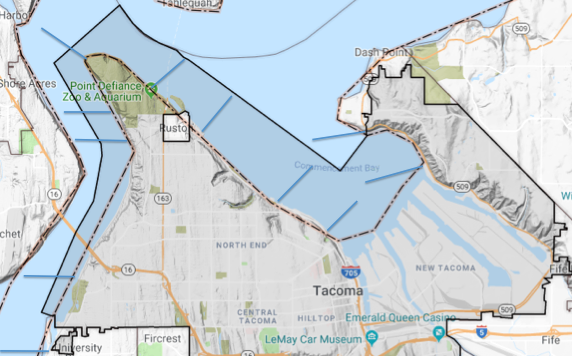 There are nine sections for volunteer signups. Some of these sections are going to be better for people to access on foot while others will need a kayak, canoe or SUP in order to get to them. There are a few sections that will require a mix of both.

The ideal way to do this will probably be in groups of two: one person updating the app as they go, the other keeping a tally on paper, both picking up what is found. Of course, groups of three and four might be just as effective… it’s all about getting a good count and getting the stuff pulled off the beach.

So, here are the sections, and at the end of each description, there is a minimum number listed of volunteer spots remaining. That’s just a guideline – you are welcome to sign up for any section you want to. More on the sign-up process in a little bit…

1. South Boundary (Across from Day Island)
Begins inside the lagoon below the railroad tracks. The city’s southern limit is the narrow neck of land that separates Day Island from the mainland shore. Day Island itself is not part of Tacoma. Exclude the Day Island Marina. Best done by kayak at or near high tide.
(Volunteers needed: 2)

2. Titlow Beach
This section begins at Titlow Beach and goes north to the south end of Salmon Beach. It can be done on foot, at least for the first part,  but the northern portion is almost entirely riprap and is best covered by kayak. Currents will be a factor.
(Volunteers needed: 4-8) 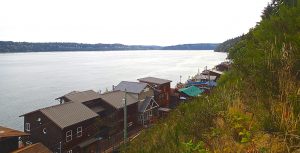 3. Salmon Beach
This section comprises the community of Salmon Beach, from south to north, and can be done on foot.
(Volunteers needed: 2-4)

4. Salmon Beach North
From the north end of the Salmon Beach community to the point. Beach trash is often present and can require some time and effort to clear. This section is best done on foot, but volunteers need to be aware of tide levels and allow themselves a good margin of safety.
(Volunteers needed: 2-6)

This section runs between Point Defiance and Ruston Way. Owen Beach is the main access point and would be a good portion for families with smaller children as it is all on foot, fairly easy at the right tide level.
(Volunteers needed: 4-8)

Between Owen Beach and the beach just east of Point Ruston, most of what you’ll find is armored shoreline. There is unlikely to be much debris here and it should be accessed by kayakers.
(Volunteers needed: 2-4)

6. Ruston Way
This section comprises most of the North Tacoma and Old Town shoreline that is fronted by Ruston Way. A mix of beaches and bulkheads, park and business, this section is best covered by a combination of kayakers and walkers. This will be the most accessible of all the sections, which is good, because it is also the largest. This will also be where the TSS tent and South Sound Surfrider will be located, adjacent to the Les Davis Pier parking area.
(Volunteers needed: 6-12)

7. Jack Hyde Park/Thea’s Park
Between Jack Hyde Park and Thea’s Park is a mixed shoreline that will require both kayakers and walkers. From Jack Hyde east to the end of Chinese Reconciliation Park can be done on foot, as can the small beach at Thea’s Park. In between, a kayak is necessary. Citizens For a Healthy Bay will be set up in this section.
(Volunteers needed: 6-12)

8. Northeast Shore
The beaches around the Dick Gilmur launch site are perfect for walking survey and cleanup. Surveyors can walk from one end of the accessible beach to the other, until they get blocked by the marina on one end and the mudflats near the Hylebos entrance on the other.
(Volunteers needed: 2-4)

9. Yowkwala Beach
This is a kayaking section, even though the survey itself can be done on foot. Volunteers will launch at Dick Gilmur, paddle north and access the beach that way.
(Volunteers needed: 2-4)

So that’s the way it all breaks down.Take a look at the sections and see if anything jumps out at you as a place you’d like to spend an hour or two on a Saturday. The third and final update, coming tomorrow, will have tide information, as well as info on the signup process and the pre-event meeting (November 9th, 7-8:30 at Round Table Pizza on Pearl St.) Did someone say, “Free Pizza?”