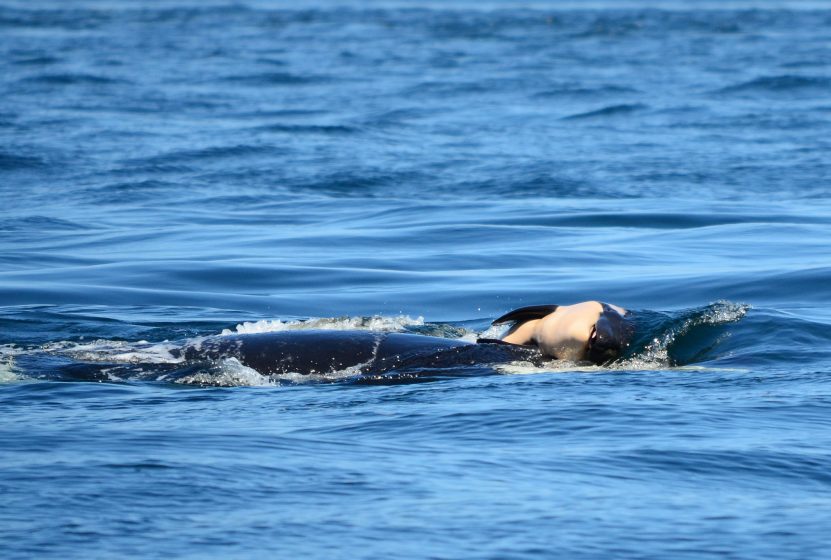 I don’t know what to say that hasn’t been said already. I’m not even sure if there are words that can really describe the depth of what is happening here.

J35, a 20-year-old orca also known as Tahlequah, is a member of the resident population of Salish Sea orcas and gave birth on July 24th to a female calf that survived for less than an hour. When the newborn died, its mother began to carry it as she swam, pushing it to the surface as if to will it to breathe, its grief all too obvious and familiar to anyone who was watching.

And seventeen days later, J35 is still out there, still swimming with her dead calf in a marathon of pain that has been reported around the world. It’s a sad situation and it hurts to watch, yet it is hard to look away.

Still, I can’t help thinking that the real tragedy is what is going on in the background, the fact that there are only 75 orca left in the three sub-pods that call the area home.  Few of those are of breeding age, and all of them are slowly starving to death because of the dearth of salmon, their sole food source. It’s a case of one endangered species that depends on another endangered species for its very existence, not a very viable proposal. The declining salmon stocks are a result of overfishing, pollution and other human activity and combined with vessel noise that makes it more difficult for the whales to track and find the fish that do remain, the picture is a grim one. While we mourn with the grieving mother, everything else we do is combining to eliminate the entire population.

That’s a hard truth. That mother, who is still out there this morning somewhere, still carrying the broken body of its child, is also carrying a message for each of us. Whether we really hear it and what we are prepared to do with it… I guess those are the things we should be considering very carefully right now.