A Moment of Concern 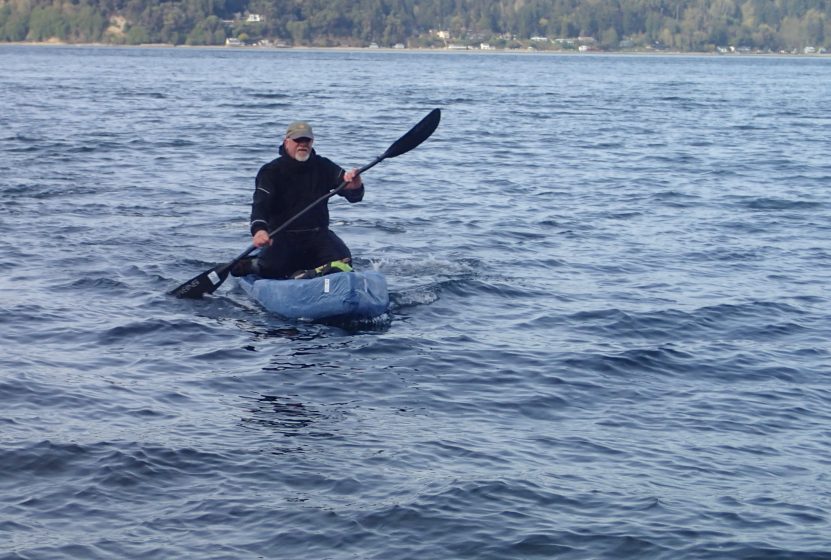 And so, here we are. Just a couple more days before the start of the Seventy48 race. I will probably go for a paddle on Saturday morning, but other than that, there’s no more prep to be done. This seems like as good a point as any for a pre-race assessment and predictions.

The boat is in good shape and I’m not particularly concerned with its seaworthiness. It is not fast, but it is stable and responsive, and I think it will perform fine. I’m going to need to be careful on the beaches, not to damage the skin too much, but on the water, I think it will be respectable. I’m guessing my sustained cruising speed will be around 2 – 2.5 knots, depending on wind and current.

Which brings us to the weather. We’ve got a front moving through this weekend but the race days don’t look bad. I do have some concerns about whether the wind will shift once the front goes through, but there’s not much I can do about that. A north wind would certainly impact my progress, and if it’s strong enough and sustained enough, it would probably mean I wouldn’t be able to finish in time.

As far as physical prep has gone, I feel like I’ve done what I needed to do. Between regular weight room sessions and a steady schedule of paddling in the Tacoma Narrows (much of it in the dark and very early in the morning), I don’t know too much more I wish I would have done to get in shape for the race. It’s not a special routine, just what I do on a regular basis, but the body feels decent. There are aches and pains pretty much everywhere, but that’s not due to any specific ailment so much as it is the overall mileage. It’s not the years, it’s the mileage.

The mental prep is as important as the physical, if not more so. It’s going to be a big party start, lots of noise and hooting, but that will not last long. Most of the course, at least for me, will be an exercise in solitude, and with so much of the route being done at night, I expect that I will be talking to myself fairly often along the way. I remember a long time ago, on an all-night climb of Mount Fuji, the other climbers on the trail encouraging each other with cries of “Gambate!” (Keep going!) All through the night, we greeted one another with that exhortation, and it’s something I will certainly have at the forefront of my mind throughout.

Then there’s the reason that I’m doing this in the first place, which is to bring a message about marine plastics, and to challenge each of us to examine our own use of plastic in our daily lives. I don’t know how that’s going… I hope it’s successful in getting out amid all the hoopla of an event like this one. It’s encouraging to see people reassessing their plastic use now in a way that wasn’t being done five or ten years ago. We still have a ways to go.

As to a prediction on finishing time, it’s hard to say. With all these variables and as-yet-unseen difficulties that tend to arise in tasks like this one, an accurate guess is going to be difficult to make. Like Yogi Berra said, “I don’t like to make predictions, especially about anything involving the future.” But, if I had to, I’d say that I will arrive in PT on Wednesday afternoon, at the 43 to 45-hour mark. (This is just an estimate, a ‘wild-ass-guess,’ as they say, and should not be used for gambling purposes.)

That’s about it. Nothing left now but the wait and the pain.