Flight of the Basura 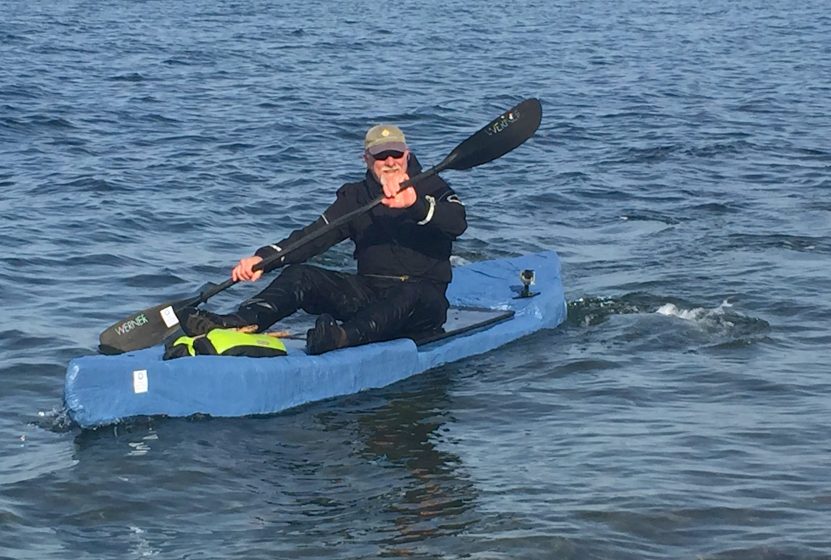 The Basura del Mar officially became a boat yesterday. I got it in the water about 5pm on a sunny April evening and put it through some paddling drills just to see how it would feel. It turns quick like a whitewater boat, which is surprising to me, and it definitely prefers being a kayak, rather than a SUP, but it paddles nicely overall. I was able to get it up to speed and hold a decent pace for a quarter-mile or so and I could almost edge it while turning. I don’t know how fast I was going but it was comparable to what a recreational boat might do in the same circumstances. So that’s positive. 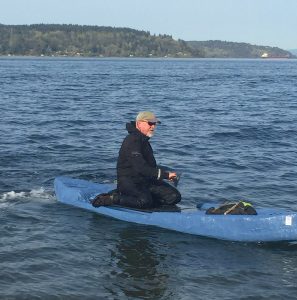 I’ll need a longer paddle (220 is appropriate for a much narrower beam than this one.) I may also do some modifications to the deck, now that it appears I’ll be mostly using the space either sitting down or on my knees. I can see foot braces and some kind of seat, maybe just a padded area amidships. It will free up space for gear, not that I’m taking much, but it will give me some flexibility in that regard. I’d also like to engineer some kind of cover for the bow area, to help stop water pooling in the small forward cuddy.

I could get technical, talk about how I wish I would have made the skeg bigger or made the hull a little flatter. Mostly, I wish I had spent more time shaping, even if it meant trying to engineer a saw that could have been better at getting through the glue. (The electric knife was great for carving up the foam but those blades were no match for the consistency of the glue that holds the various foam pieces together.)

But there will be time for all that. Today is for being thankful and pleased that it all came together into something that is going to work for the Seventy48 race (and probably past that), and that will get the word out to more people about the plastic that is in our lives. I think this particular boat, most of it made from actual beach debris, shows how our addiction to plastic eventually harms the ocean, and has an outsized negative impact on our own way of life. It is not something that could happen; it is happening already and we have to respond, to make some changes. I don’t think it’s something that most people want to think about but I hope that wherever this boat goes, it can change that. 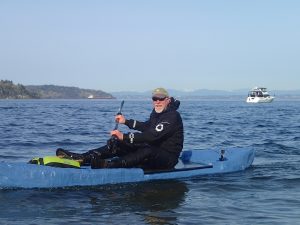 Finally, I would be remiss if I didn’t thank those who offered assistance during the construction. Thanks to Chris Kerrick and Jen Sanderford for supplies and to Craig Hightower for the excellent knife. Much gratitude also to Ryan Spence, for giving me a heated place to work during the wrapping process, something that allowed the glue to set up perfectly. To those who offered encouragement and support, a hearty thanks, given with a deep sense of how fortunate I am to have you on my side. I promise I will paddle hard.

» journal » Flight of the Basura