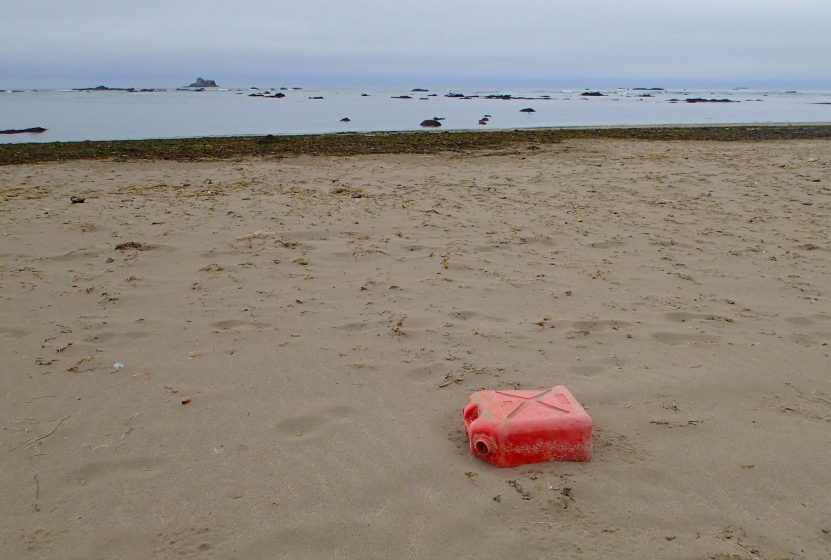 In Japan, in some of the places that were hardest hit by the 2011 quake and tsunami included homes and businesses that used kerosene heaters as their main source of heat. Which may or may not be an interesting fact, depending on whether you sell heaters for a living.

One of the more difficult things about being able to positively identify items on Northwest beaches as being specifically related to the tsunami is that many of the things that got washed out to sea and that were able to make the voyage across the northern Pacific were already commonly seen on our shores. Fishing floats and buoys, nets and rope fragments, marine foamed plastic from docks and fish pens and bottle after plastic bottle, most of them with Asian writing on their caps. When the tsunami hit, these same items made the ocean crossing and there were certainly more of them about than usual, but to actually be able to know for certain that one or another of them came as a result of that fateful day was nearly impossible.

The kerosene for all those heaters, however, was stored in 20L plastic containers, at least one per house, red and sturdy jerry cans with one important characteristic: these containers are only seen on land back in Japan. They have no marine application, therefore, for them to end up on North American beaches would have to be a result of something happening to a house, or a lot of houses. Like an earthquake.

I found the one up top last Friday on Kayostla Beach, on the Olympic coast. It was sitting there on the sand, well below the last high tide line. 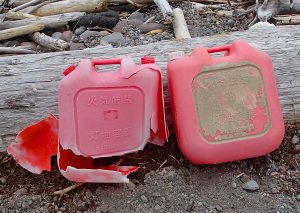 During 2012 and 2013, these cans were a pretty common sight but there aren’t nearly as many of them now. Because they all went to sea as a result of a singular event, the majority of them made landfall within range of each other, between northern California and Alaska. (The ones on the right were found on the beach on Augustine Island during our 2013 expedition.) Still, every now and then, another one comes ashore, battered and cracked, with the remains of a few hundred pelagic barnacles still stuck hard to its skin. Each of these distinctive containers is a reminder of that terrible day, with a thought to the home where it used to be and the dangers inherent in living on this particular planet.