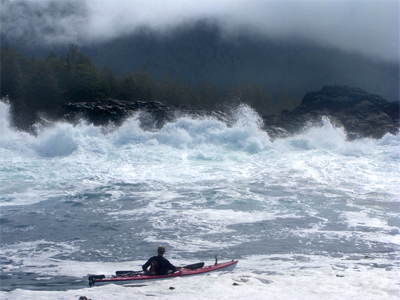 It’s raining outside but it’s warm in here. The dog is curled up at the side of the wood stove, I have a cup of tea… life is as it should be.

At Solander Island right now, it’s raining a bit harder. The wind, from the ESE, is blowing 28 knots and gusting much higher than that. There are sure to be little pockets of calm water in and among the islets along the north shore and the wind wouldn’t be nearly so strong there as long as you stayed close in. The surf would even be smaller because of the wind, right up until you start around the corner, cutting between Solander Island and the tip of the peninsula. The full force of the gale would smash into your chest and your eyes would instantly tear up and the power of the elements would touch you like an explosion. It would be foolish to attempt to round the Brooks Peninsula in a kayak on a day like this.

Tonight, in Tacoma, the circus is coming to town. By that, I mean that the first of two public comment meetings is being held at the Tacoma Convention Center focused on the strange saga of the Chinese methanol plant that is being proposed for the Tacoma tide flats. The idea is to give the city office that is doing the Environmental Impact Statement (EIS) some citizen feedback on questions they might want the EIS to include: 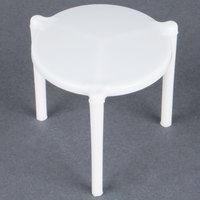 “How much water will it use?”
“How much power will it take to run?”
“Where is that water/power going to come from?”
“What about earthquakes? Sea level rise? Fire and/or explosion hazards?”
“What are the impacts of the fracking that was used to get the natural gas this plant will use?”
“What does a plant like this mean for shipping in the area? What other local environmental concerns might arise from increased traffic and potential spills?”
“The methanol will be shipped to China, where it will eventually become plastic. As in, plastic packaging, bread bags, soda bottles, toothbrush handles and pizza savers. How much more plastic do we really need? How much of that is going to end up in the ocean, or right back here in the Salish Sea?”
“Did we really spend 30+ years cleaning up the worst Superfund site in the country so that we could give ourselves a shiny, new methanol plant? Environmentally speaking, how low is this city willing to go to turn a buck?”

I will be there tonight and I will add my voice to the others in opposition to this stupid idea. But there is a part of me that would far prefer being in an 18-foot kayak, dodging death near Solander Island.