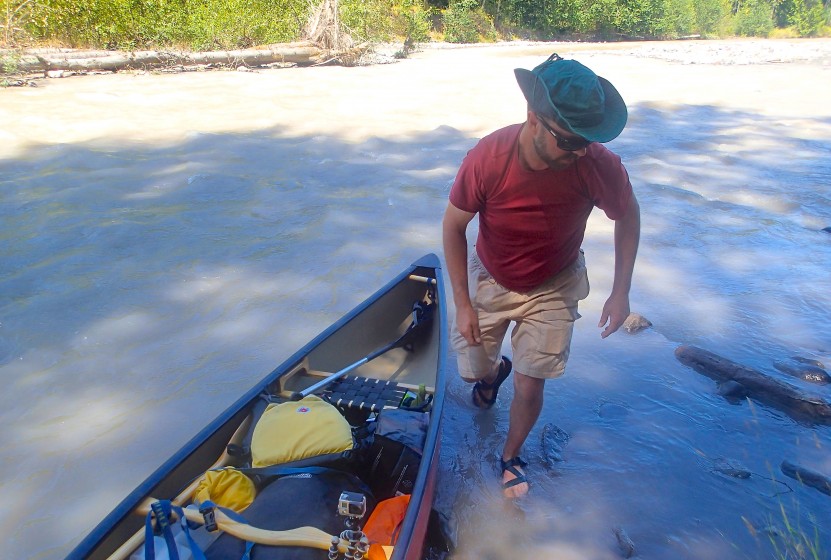 Sunday morning is all blue skies and sunshine again after rain through the night. The distance between camp and the place where John will meet me isn’t far and I get there with ample time to spare. I go through my gear and separate out the items I won’t be needing for the on-water portion of the trip, and will leave them in John’s van, along with the bike and trailer. 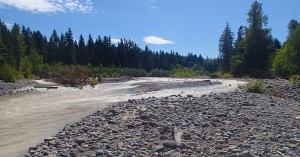 I’ve done other trips with John, kayaking junkets on the coast and in Willapa Bay among them, and they have always been good. It has been a while since either of us have been in a canoe on moving water, however, and the learning curve has a few spikes in it at first. It doesn’t take long though, before we’re finessing the canoe through the narrow gaps and around the obstacles here in the braided upper channels.

There are a number of spots where we have to get out of the canoe and line it down the shallow drops. There just isn’t enough water to float us in these places, reminders again of the low water levels this summer. Except for a few deep pools in a handful of protected turns in the waterway, this first day seldom saw us in water more than two feet deep. 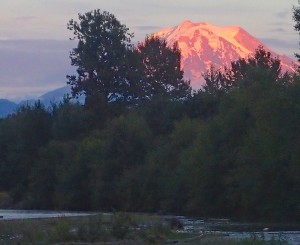 We camp on a gravel bar near Orting, just a few feet away from the water’s edge. The mountain shows itself just before twilight and the alpenglow on its flanks and faces reflects the sun’s light back into the valley. We put our bedrolls down on a layer of fine river sand and sleep under the stars.

The next morning we are up early and on the water. The river has lost some of its bounce that it had farther up but it still moves quickly below the hull, and there are several more miles of active sections to go before we are finally in the flat lands. We see two beaver within the first hour, unexpected encounters here on such fast moving water. Perhaps they live up some quiet tributary and have come down to the river to harvest some salmon. We can see this year’s returning fish along the way, tail flicks in the shallows and dorsal fins in the brown water on either side of the boat.

The air warms quickly as the miles slide past. I collect more water samples and stash the bottles in the boat, positioning dry bags and other cargo around them to keep them upright. Just below the spot where the White River joins the Puyallup, we come ashore for a break. We can see houses fairly frequently now and there is no doubt that we are out of the rural areas, but the river still retains a sense of wildness, and a beauty that I had not expected to find. 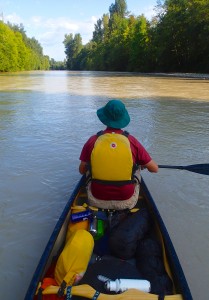 From here on out to salt water, we are never out of sight of buildings, roads and people. We pass through the edges of Sumner and coast into Puyallup. The banks here are thick with fishermen (they are, with few exceptions, men), and John and I pick our route with care to avoid the flying hooks. We hear the same jokes repeated in good-natured fun as we paddle on, and they all seem genuinely surprised to find that we are not fishing ourselves, as if there could be any other reason to be on the water.  Trees along the banks are festooned with abandoned lures and line, monuments to casting failures that will remain for years to come.

The last few miles are a workout. The gradient is no longer evident, the river has been straightened and channelized, and we are working against both wind and tide as we approach the mouth. There are homeless camps along the shore in several places, under bridges and in the sparse woods. The surrounding land is all industrial, the port on one side and the huge pulp mill on the other. 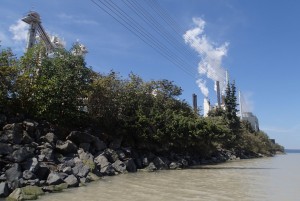 And then we are there. In salt water and a truly marine environment. Because the tide is still rising, the line between the dun-colored outflow of the river and the blue of the bay is right there at the rivermouth, and we paddle across it and out into the wider waters of the bay. In less than 20 minutes, the trip is done.

I was able to collect seven samples that will be sent back to Maine next week and included in the growing microplastics database. There was a section of about ten miles of river that I was unable to access, so in that respect it’s hard to say that I traveled the whole river from start to finish, but I still see this adventure as an unqualified success. There will be more to come from what was learned over the course of the past week and from the data that was collected, and it will be interesting to see how it all comes together. 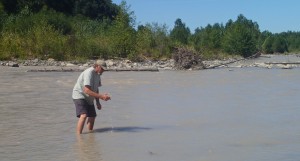 I have a few ideas…