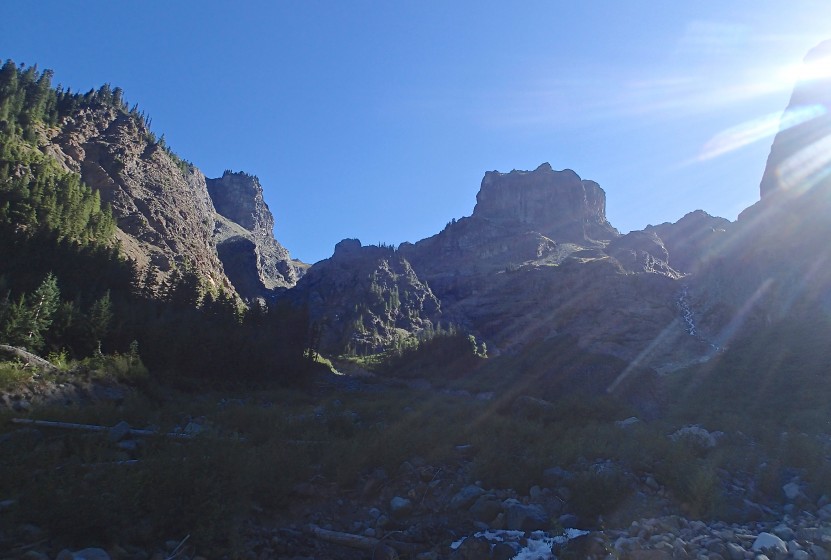 Day 2 of the Puyallup trip dawns sunny and clear. The sounds of bird song and river music ease me into the day. Over breakfast, Ned and I get our things together for the day’s hike. We’re climbing from the North Puyallup campground up the riverbed, up into the higher elevations toward the glacier, the source of the Puyallup River. We’ve scouted the route possibilities from the campground overlook, and the time has come to give it our best shot. There is a tiny finger of the glacier that we can see from the starting point, tucked into the gully at the top of the stream, our target for the day.

We descend to river level down the trail next to the stone bridge abutment, the foundation for a bridge that was never built. This is the actual end of the West Side Road, where the last stones along the road were laid back in the early 1940’s. Ned points to it and tells me that this is like looking into history, that when the US entered WWII, road construction ceased. I spend a minute looking at the bridge foundation and trying to figure out which stone was the last to be put in place before the workers traded their trowels for guns. 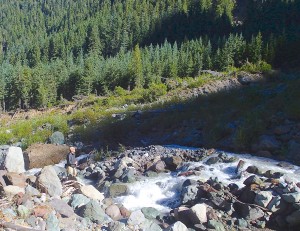 Away from the campground, we are quickly in the high mountain wilderness. The river gets smaller as we climb but remains loud, the frothy white water dancing down the stone. We get up higher and higher, the angle of our progress getting steeper as we go, crossing several other streams along the way and eventually getting past the last of the trees. The rock is chossy and brittle and there are a few places where I take chances with my footing, winning temporary victories over the forces of gravity, but I know that my luck can’t last. The consequences of a fall in this environment could be serious and we finally make the decision to stop the climb at a point about a hundred feet below the glacier’s tip. 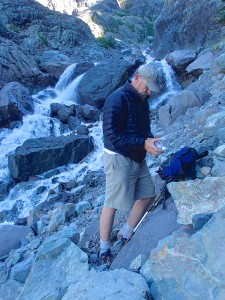 There is a waterfall cascading into a rocky pool at the high point of our climb and it is here that I take the first water sample of the expedition. The microplastic survey that I am collecting for has recently broadened its focus to include fresh water samples and this liter of silty meltwater will be the first taken from this river. I plunge the bottle into the icy pool and watch as the air bubbles out of the opening, then cap it and start back down.

The return to camp is considerably more difficult than the climb. Knees are sore when we get back and both Ned and I grab a quick nap in the late afternoon sun before we move to Plan B. It is clear to me now that not only would it be a difficult task just to get to river level downstream of the campground, but my initial plan to cover the miles between here and Electron on foot along the river bank could never be done in the time I’d allotted. As we look at the map we see a logging road just below Klapatche Point that looks like it connects to the roads along the river. We decide we’ll bushwhack our bikes through the woods until we hook up with the road, then pedal our way out. It seems like a pretty good idea at the time. 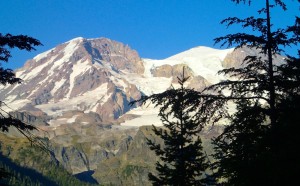 We decide to make camp that night at Klapatche Point rather than stay at the North Puyallup, the better to get an early start the next morning. We break camp after dinner and start the hike out along the old road once more, stopping as we travel to look back toward the mountain. As the trail climbs toward the point, more of Rainier becomes visible in the evening sun and we can see the Puyallup glacier atop the valley we had hiked earlier in the day.

We camp in the parking lot, our packs piled on top of the wall, sleeping pads out in the open. As the golden sun sets and the sky grows dark, the night explodes with stars. It isn’t long before we’re watching for meteors and satellites and I see the glow of the Milky Way for the first time in far too long. There is no ambient light here and the night sky is revealed in a way that isn’t possible in the city, or in most rural locations either. I fall asleep watching the light show, resting my mind and body for the day to come.