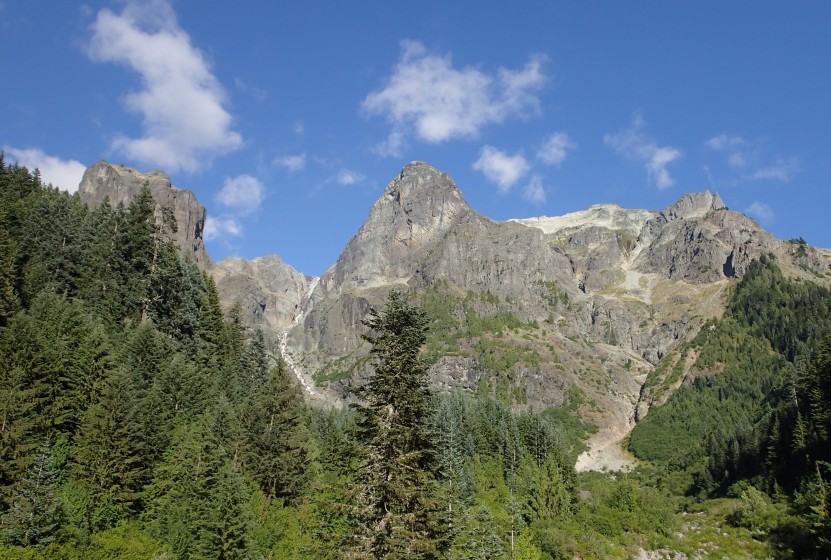 By 7:00am I am at Ned’s house and within a half-hour, gear is loaded and we are on the road to Mount Rainier. It is the first day of the Path of the Puyallup trip, a journey down the length of the river, from its alpine beginnings to the salt water of Puget Sound, and we are both eager to get started. 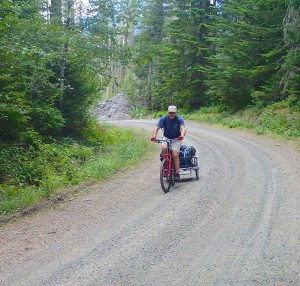 We actually get underway, from the West Side Road parking area with bikes and the rest of our gear, by 10:00am. I am pulling a trailer, a one-time child carrier I’ve converted into a cargo hauler, and it’s loaded with everything we are bringing with us. We have both packed light, but with camera gear and extra water, it’s a significant weight I have behind my bike, and a couple thousand feet of elevation gain ahead.

The plan (what I now like to think of fondly as “Plan A”), is to bike up to the end of the West Side Road, to Klapatche Point, stash the bikes and trailer and continue on foot to the North Puyallup campground on the Wonderland Trail. We will set up camp there by the river, then climb up to the toe of the glacier the following day and back down again, spending a second night at the same spot. The next morning, we will hike down to the river below the campground and follow the waterway on foot down through the high country and National Forest lands for a couple days until we get somewhere near the town of Orting.

From there, I’d be continuing down river by canoe with John Inch (Ned having left me at the end of the river hike), and two days later, we’ll paddle together out into Tacoma’s Commencement Bay. (This latter part of the scheme actually would come together as planned. The first portion, however, was doomed). 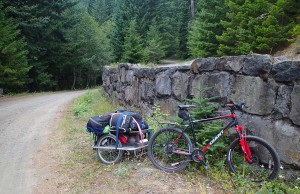 The 8 or 9 miles in on the West Side Road on a bike is both wonder and pain. Almost a hundred years ago, this was going to be the western connection, part of a road that was going to encircle the mountain, a 1930’s-era infrastructure program designed to make the backcountry accessible by car. The project was never completed – WWII ended the work – and the Park Service has since closed the road to vehicle traffic (with exceptions made for their vehicles, of course). It is a well-maintained gravel road, with stone walls and bridges of the most amazing craftsmanship along the way, but it rises steadily from the Park Service gate to the top of Round Pass, about 4 miles in.

We pull out at places that were once parking lots, roadside rest stops and scenic vistas that have been obscured by the growth of the forest since the last tourist rig rolled through these parts. Ned says he remembers driving this way back in the early 1980’s, but it’s been closed ever since I came to the Northwest. Still, with the elegant stonework at my side and the pristine country all around, I can almost see the old Model-T’s sitting in the pullouts along the way as we huff up the hill. 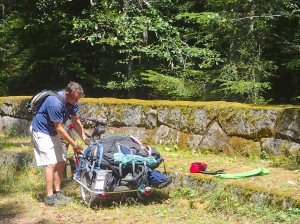 At the crest of Round Pass, the road drops away, a welcome respite from the first section. I stop at a few places on the long, straight downhill run to take photos and video, and just to listen to the sounds of the alpine rainforest: the trickle of the stream running alongside the road, the swishing of the fir and cedar above me in the warm breezes and the chatter of birds and chipmunks in the underbrush. When I get to the bridge across the South Puyallup, Ned is there waiting for me.

The road keeps going downhill to St. Anthony’s Creek, then climbs again all the way to Klapatche Point. Almost all the elevation that we lost after Round Pass gets repaid on this last section of open road. We get to the large, empty parking area at the end of the road and stash the bikes in the woods, throw on the packs, and head on up the trail. So far, so good.

This trail we are walking on was once part of the road. The same intricate stone walls line the sides and the roadbed, although often damaged by rockfall and erosion, is still very visible. It’s an easy hike to the North Puyallup campground and our eyes are drawn to the spectacular mountain views that come more frequently as we get closer to the day’s destination. Looking at the river cutting its path hundreds of feet below us, I am beginning to question the original route plan and I’m already thinking of possible alternatives, but these are matters for later discussions. 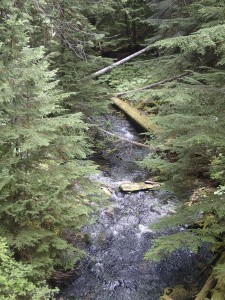 There are still hours of daylight left as we unpack and set up camp. We go to the overlook and stand in awe of the twin pillars towering 3000 feet above our heads, the chutes and hanging canyons below the ridges, the tiny ribbons of water that braid together below the tongue of the glacier to form the headwaters of the Puyallup River. The sun lights up the rock and makes it glow. We pick out a route up the cascading stream as we look upward. For an hour or two, maybe more. It’s impossible not to be drawn in.

Ned used to be a climbing guide on Rainier. He’s visited the summit hundreds of times and has explored most of the mountain by backcountry skis. It would be fair to say that he loves this mountain and that, after more than 30 years, he knows it very well. He says he can’t remember ever seeing it with so little snow cover. The glacier we should be seeing from this spot has retreated over the near rim and there is no snow in sight. None. There should be but there isn’t. He points to an area above the canyon where he and a friend were skiing almost exactly a year ago. it is bare rock now, not a snowflake in sight, the difference of a single year. 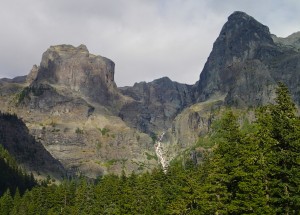 I think about the beauty and the uncertainty of this place as I lie in my bag under the star-spangled sky. Rivers are the measure of their watersheds, the combined sum of their local surroundings. They tell the story of climate and storm, as well as of the effects of a growing human population. I think about how far we’ve come today and how impossibly far it seems I have yet to travel. Mostly, I think about the next day’s climb, the steady timelessness of this alpine world and how I never cease to be amazed by the beauty of this life.