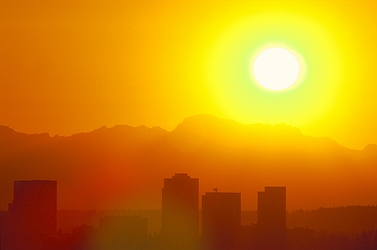 Supposed to be another hot one today. In some parts of the country, the temperatures we’re getting here in western Washington wouldn’t qualify as “hot,” but for here, they are positively stifling. It’s just not how things are up here in Cascadia, except that maybe it is. Maybe this is what we’re going to need to get used to, in a time of changing climate and human-caused weather inputs.

Katharine Hayhoe, climate scientist and professor at Texas Tech – talk about a tough venue in which to be a scientist! – puts it this way in an interview with Salon.com: “In most cases climate change is not creating new weather events that we have never seen before; it’s exacerbating them. We’ve always had these wild swings, but now the amplitude of the swing is increasing. Whenever drought comes, it’s hotter than it would’ve been otherwise. And when it’s hotter, it means that more water evaporates from the soil, and from the reservoirs, and from our rivers. So it means that it will be hotter than it would’ve been otherwise. And when the storms come, the increase of heavy rainfall on us is because the atmosphere’s warmer, and there’s more water vapor sitting out there for the storm systems to take down… it’s interesting that it’s often challenging to understand how climate change can be exacerbating extremes in both directions.”

In less than a month I’ll be heading down the Puyallup River to see the future first-hand. I expect that will be challenging as well.