Big Noise in the Gallery 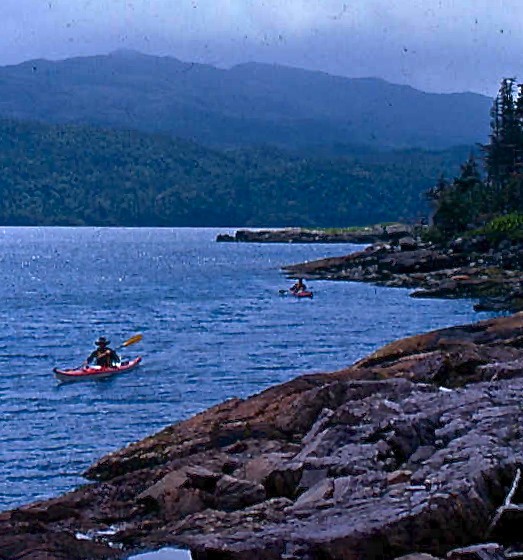 There comes a time in everyone’s life when you start to attend more funerals than weddings. We all deal with that reality in different ways but I’m not sure yet how to deal with this one.

I first spoke with Jim Price when I was managing Tahoma Outdoor Pursuits back in the early 1990’s. I wanted to offer an international kayaking trip through our catalog and I was looking for an outfit in Newfoundland to collaborate with, so I contacted Eastern Edge Outfitters and the next thing I knew, I was talking long-distance with Jim. He was friendly and helpful and though nothing really came from that particular effort, I contacted him again when I was planning my 2000 Newfoundland circumnavigation… I suppose it would have been in 1999. He remembered me (we still had not yet met), and he was incredibly helpful throughout the planning and the setup for the expedition.

We kept in touch after that and we were able to put a joint trip together in 2002, with me providing the clients from Washington and elsewhere in the States, and Jim providing the equipment and the logistical support. He also guided the trip in and around Long Harbour with me and Mary and it was an overwhelming success. Every evening around the fire, Jim would hold forth on all manner of subjects, laughing and telling stories as he cooked, reliving the wonders of the day and somehow leaving us all with the feeling that the next day would be even better. And it always was.

I just found out a few hours ago that Jim died last night. It looks like it was a heart attack… it happened suddenly and it was a stunning surprise to everyone who has heard about it. Jim was teaching a kayak class just the night before and was by all accounts in top form. No warning was issued; no sign of any approaching impact was seen. (It feels strange to even type that line, an acknowledgement of the frail mystery that keeps all of us breathing somehow, right up until the time it doesn’t.)

I have had the pleasure of paddling with Jim on several different occasions, but I realize now, too late, that it wasn’t often enough. I am more than 5000 miles away, but I can already feel the void that he has left with his passing. There has already been an outpouring of grief and fond memories from the Newfoundland paddling community… rightly so, and there will be more to come… but Jim made a difference wherever he went.

I sometimes think that we are losing legends these days faster than they are being produced. With this sad event, we have lost a true original, a pillar of paddlesport and a genuine human being. It hasn’t even really begun to sink in yet.