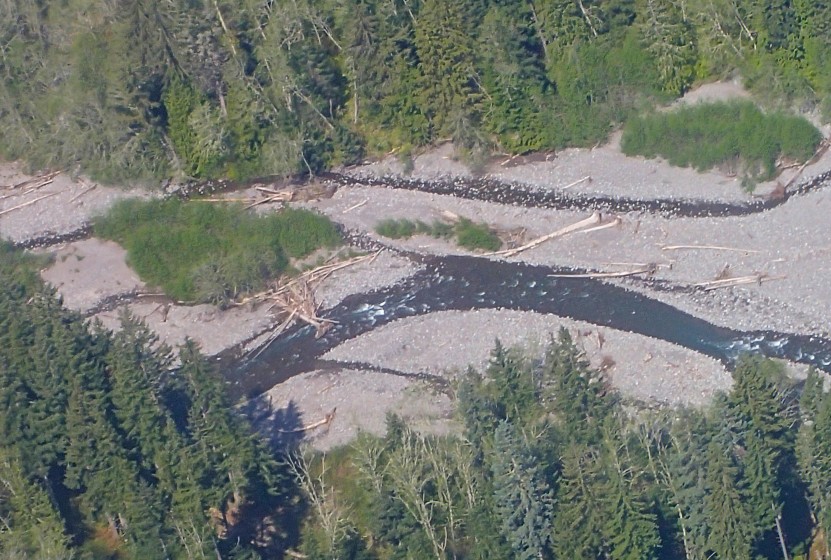 Later this summer, I have plans for a trip down the length of the Puyallup River, from its beginnings high on the western flanks of Mount Rainier to its confluence with Puget Sound. The idea for the trip came about as a way to tell the story of the river and its varied ecosystems along with the people who work and play in and around the waterway. I felt like I needed to know it better, to follow the twists and turns of this important river and to be able to identify with its various stages and how it affects its surroundings. There was the idea to explore the way that plastic debris moves through the creeks and into the river, and from there out to the salt water, tons and tons of it every year. That is still an important tale and one that needs to be told, but I’m not sure if that’s the way this particular story is headed anymore. 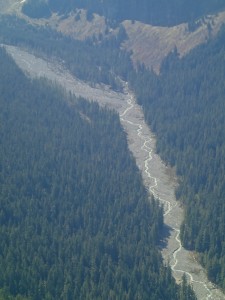 I had the chance to fly up the river from its mouth to the mountain this morning. A beautiful bluebird day, perfect for aerial observation and trip planning. I can see the silty debouchement at the mouth, where the fresh and salt water mix. The lower reaches of the Puyallup have been channelized and straightened, fundamentally changed from what they used to be, and the tide pushes and pulls its way along here. From my seat 1500 feet up, I can see some of the old routes, stranded loops of wetlands that used to be connected to the river, on their own now in the fields and the vacant lots behind the strip malls. The river winds and slants its way down from the higher elevations and I can see the pools behind the sandbars, the trees overhanging the banks.

Above Orting, the river is braided and seems more wild, with channels lying like ropes on their rocky concourses. And a little higher up, above where the town of Electron used to sit, the effect become 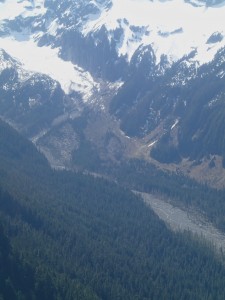 s even more pronounced. The riverbed is wide, with scattered logs strewn along its banks by the high waters of days past, but the water that runs there now is hardly a flood. It is difficult to tell from this high up, but what I am seeing is obviously well below any kind of peak flow, not even near normal runoff levels. There is a gorge that lasts for about five miles or so and it’s difficult to see too far down into the canyon, but where the view opens up, it looks like it would be pretty easy to wade across most sections. It is not a river anymore; it should be, but it has been replaced by a creek.

In some places in the Cascades, the snow pack is down around 8% of where it would normally be at this time of year. By the time I do my trip, the shortage will be felt throughout in the lower elevations. It’s painfully obvious already up here in the high country. We may get more rain, or maybe not. This may be the new normal and I don’t know yet what it’s going to take to get used to it.